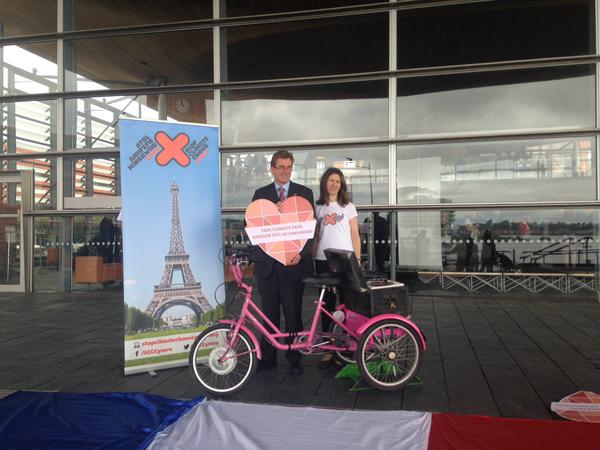 To mark the start of SCCC’s ‘Road to Paris’ campaign, which looks ahead to the UN climate change conference in the French capital this November, Mr. Black joined campaigners to call on decision-makers to take action, at home and internationally, to tackle climate change.

As well as calling for a fair, global deal in Paris, SCCC – a coalition of 14 organisations – also called for the Environment Bill to ensure that Wales plays its part in tackling climate change and has the necessary structures in place to make that happen.

The French-themed event at the Senedd included French music and a picnic, as well as an electricity-generating bicycle.

"Climate change is one of the biggest threats that we face today, and it is crucial that we take action to tackle it. I am pleased to be able to join Stop Climate Chaos Cymru in calling for the Paris climate talks later this year to produce a fair global deal, and for action to be taken in Wales that helps us here play our part in combatting climate change."

"It’s great that Peter has joined Stop Climate Chaos Cymru for the start of our Road to Paris campaign. The climate conference in Paris this November presents us with a fantastic opportunity to reach a fair global deal on action to tackle climate change.

"It’s also extremely important that the Environment Bill which is currently going through the National Assembly delivers the structures that we need for us here in Wales to be able to play our part in the global fight against climate change."