Let us have your views on safe standing at football grounds 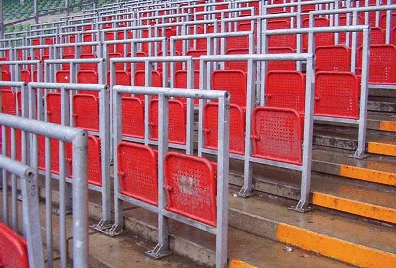 The Liberal Democrats want to change the law and allow Premier League and Championship clubs to introduce safe standing at stadiums.

The party has confirmed it plans to make the pledge as part of its 2015 General Election manifesto.

However, the party is not advocating a return to open terracing.

It believes rail seats, popular in German football, should be introduced if clubs wish to install standing sections.

Rail seats can be locked in an upright position to allow fans to stand and lean against a barrier.

The seats can also be unlocked to comply with all-seater stadium rules, as and when required.

The Football Supporters' Federation (FSF) has led a campaign in favour of safe standing for several years.

Peter Black signed the motion for a Senedd debate before the summer recess, which called on the Welsh Government to work closely with sport associations and  regulatory authorities to promote safe standing.

"We feel that this is an option that clubs should be able to take up," he said. "Things have moved on  quite significantly since Hillsborough. The designs which  are now available means that we can put a standing area in a ground safely  without the risks and problems which came about back then. We should be able to let clubs pilot safe standing areas in their grounds if they wish to do so."

We, the undersigned support the campaign to change the law so as to enable football clubs to pilot safe standing areas in their grounds if they so wish.