The Welsh Liberal Democrats Assembly Member for South Wales West, Peter Black has written to the leader of Swansea Council to demand that the ruling Labour group honour its promise to the communities of Pennard, Southgate, Kittle, Bishopston and Gower over keeping Pennard Library open. 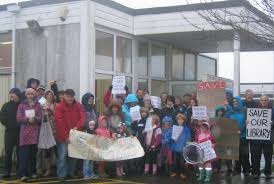 Mr. Black’s intervention came after council officers told community representatives that: “...the new Cabinet members do not feel able to give us the go ahead for a continued library service in Pennard”, despite the fact that undertakings were given by both the immediate past Cabinet Member, Nick Bradley and the new leader of the Council last year that if the community were able to improve the library building then they would support it remaining open.

On the strength of this promise the community of Pennard put together a robust business plan that would lead to the library becoming self-sustaining in financial terms and secured a substantial grant from CyMAL to redevelop the building. They have planning permission for this development and just need the Council to sign off the grant. However, it now looks likely that the ruling Labour group will pull the plug due to the ongoing revenue cost.

“The stance now being taken by Swansea Council is contrary to the written undertakings given by the former cabinet member at the time, which was made in full knowledge of the revenue consequences of that promise,” said Mr. Black. “When last year’s budget was discussed in Council, Councillor Rob Stewart, who now leads the council repeated that undertaking.”

“I understand that times are hard and that the Council faces a difficult budgetary situation, however I also think it is reasonable that the communities of Pennard and Southgate and surrounding communities should expect that undertakings by cabinet members should be binding on the council and that they will honour them. To renege on that promise now would be a huge betrayal of those communities.”